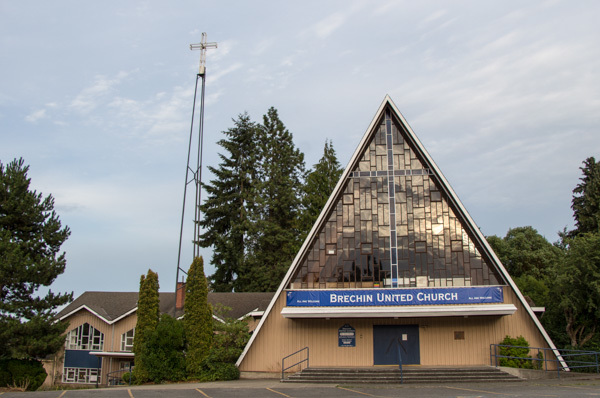 At the turn of the century the Brechin community was made up of coal miners' families.  With the decline of coal mining in Northfield, a building which had been used as a store was donated by the executors of the Hannah Wall estate to the Brechin community for use as a school and meeting place.  This building, known as Brechin Hall, was moved onto a lot donated by the C.P.R. on Estevan Road, almost opposite the present end of Maple Street, and was used as a day school and church school until 1913, when the mines were closed. The Hall was given to the Methodist Church and, except for a few years from 1915 to 1921, was in use with various additions until the present church building was opened in 1958.  The old Brechin Hall was torn down shortly thereafter: the 'new building' was used for many different purposes in the years following, and was torn down in 1980.  In 1905 services for the Brechin Methodists were held in various homes in the district, conducted by lay preachers who belonged to the Lay Preachers Association of Nanaimo, a group connected to the Methodist Church.  Mr. William Manson (Wendy Jorgensen's grandfather) was one of the prominent lay leaders at this time. These lay preachers received no compensation and got from place to place by walking, cycling, on horseback, or by horse and buggy.  If at times it was necessary to rent a livery horse, then some effort was made by the congregation to meet that expense.

The first recorded service by a minister was held on February 11, 1906. The Rev. R.N. Powell, Vancouver, assisted by the Wallace St. Methodist Church choir, held morning and evening services. This date is considered the birthday of the church in the Brechin area, and was celebrated as such. In 1910 the Nanaimo Suburban Charge, a five-point charge, was inaugurated.  The Rev. S. Cook was responsible for Wellington, East Wellington, Brechin, South Wellington and Cedar, which was designated the "Wellington Circuit."  He lived in Wellington, still a thriving coal mining town.  At this time there were four soccer teams belonging to the various churches.  The players were active church members, and in 1912 Brechin was the Championship team!!  In 1913 the Brechin mines closed, and many miners and their families left the district.  Although the weekly collection averaged only $1.00, the Sunday School (25 strong) managed to send $20.00 to the Mission To Lepers in Toronto.

In June, 1949, Mr. C.G. Piper started as Lay Evangelist at Brechin and served until June, 1953.  The minutes of the Ladies Aid record that Mrs. Cannon donated $1.00, and Mrs. Warren 80 cents from 'GALLOPING TEAS' which were held in their homes.  The minutes of the 1951 Annual Meeting record a church collection of $1,264.00.  The W.A. had two groups, Afternoon $395, Evening $269; and the Sunday School $265.  There were forty active families, and 270 under pastoral care.  We were growing!  In 1952 the W.A. minutes record that Mrs. M. Inkster would "like to start a choir" and several ladies volunteered to "give it a try."  In 1953 the Rev. T. Nuttall was called to a three-point charge; Brechin, Wellington and Lantzville.  In 1954 Sunday School was held in the "new hall," an addition to the old building; and Dr. L.B. Hem conducted services as a Retired Supply.

In 1956 the Rev. Bill Van Druten was inducted to the three-point charge, and Mrs. Inkster agreed to act as organist.  In 1957 the choir organized, with Mrs. Anne Kinne as President.  After much discussion with the Home Mission Board and the Victoria Presbytery Extension Committee, it was decided that Brechin needed a new church building.  1958 was the big year.  The Afternoon and Evening groups of the W.A. amalgamated; the A.O.T.S. was organized, with Mr. Eric Crossin as the first President; and the new building was constructed at the corner of Brechin and Estevan Roads. The first sod was turned on April 6, (Easter Sunday) by Mrs. S. Bennie, at 77 the oldest member of the congregation.  Mr. Norm Hastings, the Building Chairman, presented the keys of the new building to Mr. Van Druten on October 11, 1958 a Thanksgiving and Dedication service to be remembered.  A Conn electric organ provided the music in the new church.  The church sanctuary was built to seat 380, with room for 50 more in the balcony.  The Fellowship Hall, planned to accommodate any overflow from the sanctuary, holds another 125.  The architect was Mr. J. White; the Chancel was designed by Mr. Fritz Schultz; and the builder was H. Kemp of Burnaby. The front window frame is made with 1100 pieces of wood, each individually cut to fit.  At this time the Sunday School had 515 pupils and 45 teachers.

On June 17, 1959, two Presbyteries were formed on Vancouver Island, the Victoria and Comox-Nanaimo Presbyteries. On July 1 Brechin became a one-point charge, (another big day), and on July 2 Rev. Van Druten was inducted as Minister of Brechin United Church.  In 1960 we acquired the manse at 1801 Bay Street, and a Junior Choir (20 members) was organized, with Mrs. Jeanette Sheepwash as director.  In 1961 we became self-supporting.  The W.A. and W.M.S. formed the U.C.W., and Mrs. Anne Kinne was the first President of the new group, with five units operating.  (Ask someone about the pie sales). The A.O.T.S. became expert floor tilers.  In August, 1963, the Rev. Bob Gracey was called.  In 1965 we paved the parking lot.  During this time Florence Hastings and Edith Tait formed the Talk and Listen group.  Bob and the congregation saw a need, and in 1967 the Nanaimo Family Life Association was formed.  Helen Robertson was the first co-ordinator.  Kay Freeman organized the first Brechin Flea Market in 1968.  The floor tilers were still at work!

In 1970 the Rev. Art Griffin was called.  Again a need was felt, and with the leadership of Pearl Griffin, Meals On Wheels came to Nanaimo in October, 1971.  A "Mothers Take-A-Break" program was started in co-operation with St. James Anglican Church, and for four years the churches operated a Time-Out for young moms while their children were cared for by women of the two congregations. This program was taken over by Parks and Recreation.  During the "hippie" years Brechin opened its doors to travelling young people, and for a few weeks we provided a roof, use of the kitchen and washroom facilities, a snack and adult supervision.  Then arrangements were made with the School Board, and a hostel was opened in the Franklyn Street Gym.

In 1975 the Rev. Harold Boyd was called.  In 1976 his wife Gwen became our church organist.  On November 19, 1978, we 'burned' our mortgage.  The U.S. Group (United Singles) came into being in 1979, thanks to Jack Harding and Valerie Reay.  Although rummage sales were a part of the old church, they had died out; but about this time Flora Bailey and Irma Wehner got them organized again.  During Harold's tenure the Brechin Players was also established; our first play was "Shepherd's Song" in December, 1980.  Harold was also instrumental in forming the Youth Accountability Board, and many Brechinites served on and with this Board.  In 1982, again thanks to Flora Bailey, the Care-Ring was started.  This later became the Prayer Circle.  When the economy turned, the need for food and support was desperate, and the churches and community at large banded together to form the Economic Survival and Recovery Program in the summer of 1982.  The first "support'' afternoon was held in the Brechin gym in September.  This evolved into the Food Bank.  It was this summer that Harold took ill, and the congregation found its strengths as we tried to lighten his load.  In February, 1983, a new pipe organ was dedicated.  In June 1985, Harold collapsed at our celebration of the United Church's 60th Anniversary, and was forced to retire.  He died a month later.  The congregation rallied to support Gwen and her family in a time of great sadness for us all.  For one year we worked with an interim ministry.  Rev. Ted Fenske was responsible for pulpit supply and Bible Studies, and Rev. George Whitford and Rev. Bob Gates shared the pastoral duties.  The manse was sold, and interest from this money is used as a housing allowance for the minister.

In 1986 we called the Rev. David C. Moddle.  Coming to us from Calgary with his wife Lonnie and son Jonathon, David remained as our Minister until the fall of 1991.  When he retired from the ministry our staff associate, Gwen Boyd, continued our ministry until July 1 of 1992, when we called Interm Minister, The Rev. Bill Dyer.  Bill and Gwen worked together during 1992 and 1993 until Gwen was called to ministry at Gitseguka, Hazelton Pastoral Charge, in March.  Gwen was ordained in May of 1993.

In April of 1993, The Pastoral Relations Committee called the Rev. L.A. (Bert) Ramsey to minister at Brechin.  Bert with his wife Colleen and son Andrew, came to us from Gibsons Landing, B.C.  In 1994, a sister for Andrew was added to the Ramsey Family.  In 2003 Rev. Ramsey announced he was moving to the North country - Campbell River to be exact - and Brechin was fortunate to be able to find Rev. Chris Jensen as an interim while we moved through the joint needs and joint hiring process.

In September of 2004 we were able to call Rev. John van Omme whom together with spouse Linda and three daughters arrived in Nanaimo from Kitimat.  After six years of ministry at Brechin, Rev. van Omme accepted a call to ministry in Kingsville, Ontario.  In 2010, Brechin entered into a period of intentional interim ministry capably led by Rev. Randy Antle.  This was a time of self-assessment, dreaming and visioning for Brechin and resulted in a congregational decision to call a new minister and explore the possibility of redevelopment of the Brechin church site to include a mix of affordable/co-op housing and a new multi-purpose church building.  Rev. Anne Manikel provided transition ministry for a few months in 2012 and 2013 until Rev. Sally Bullas was called to Brechin as of May 1, 2013, when we welcomed her and her partner, John, to the church and our community of faith.  As of September 2015, redevelopment options are still being explored.  Brechin United Church voted in June 2015 to become a designated Affirming Ministry and a Service of Celebration recognizing this step forward as a radically welcoming church community takes place on September 27, 2015.